But remember both the keys are played together to give melodious music in life.

Hello friends! I am Richa Agarwal, Chartered Accountant by profession. I am a Senior Partner in RAGS & Associates, Civil Lines, Kanpur, Law faculty at ICAI since 2010-2018 and also one of the Orientation & MCS faculties at Kanpur Branch of CIRC of ICAI since 2012.

Mother of two kids (one being 11 years and the other one being 1.5 years old) & a Youtuber.

AFT Mrs. India Finalist, IPP (Immediate Past President) of Rotary Club of Kanpur-Elite, Vice-President of Asha Welfare Society. Winner of various singing competitions. Awarded as Outstanding Club Officer by Governor of Rotary International Distt.3110, 2020-21, for being actively involved in club’s activities throughout the year despite having pandemic and COVID-19 situation. Felicitated by various NGOs and institutions like Rajat Shree Foundation and various clubs of Rotary on International Women’s Day and CA. Day as well.

I have been born and brought up in a middle-class family in Kanpur. My father was a Photographer (a very hard-working, sincere, dedicated man). Mentor for many, a sagacious personality, and my mother is a homemaker. I belonged to a joint family where girls were not encouraged to study much but my mother took my stand, she was the first woman in the family to raise her voice and break the old conventions and I was allowed to go for convent education.

I was a commerce student but till my Intermediate I was not sure of which option to choose after board exams, as I won’t be allowed to go out of town for any designing or management studies due to my conservative family background and secondly due to financial constraints.

Somehow, my classmates got me a form for enrolment in CA. course. My father allowed me to do my CA. I cleared my CA. foundation in the first attempt then Articleship, P.E.-II & CA-Final. After my 2 attempts in P.E.-II and CA. final each I became a young lady CA. at the age of 22 along with my post-graduation in commerce.

Can’t forget that day in January 2007 when as proud parents they were so happy and overjoyed that my father forgot to have his lunch that day and he did not even remember this till night when he came back home, despite him being diabetic.

Anyways, it was just a beginning of a new journey, a new phase of life, new opportunities along with new challenges too. Now, what next??

Will I be allowed to go for a campus interview, Job or practice?

Everyone convinced my father and somehow, he agreed. I went to Delhi for a campus interview and got placement but my father was under pressure to get me married. When I returned, my parents told me about various marriage proposals, there were many options from CA. families and from abroad too but I wished to marry the Guy whom I liked. The reason being, I was afraid of going abroad, we are only two sisters and never wanted to go too far away from my parents.

Another big issue was that the guy whom I liked was still pursuing CA and I was already qualified. Somehow it took around two years to convince my parents and we tied knots in Feb.’2009. Obviously, I had to marry him so I rejected the job offer letter and joined a CA. firm as a partner.

I was allowed to work but not to go for the job, as it was not considered good in my family. I was forced to start my own CA firm in Proprietorship, that was not so easy for me but I started with Company’s Incorporation and Annual Filing plus statutory compliances, work that I could do on my computer from home. I was allowed to carry out professional work as long as I did not forget my family duties. I, therefore, had to look after my house, in-laws, relatives, do the cooking and of course daily chores. Under such circumstances, it would be difficult to expect me to do some work as a CA., but I did. I had tremendous faith in myself and I had heard somewhere that if you set a firm goal, work hard and preserve, and have faith in God, nothing is impossible.

My Life took a new and beautiful turn in 2010. I delivered a baby boy in June, and life changed completely. I now had the added responsibility of looking after my baby. My husband became Chartered Accountant in July 2010, immediately after my son was born. We converted our proprietorship firm to a partnership in August. In the same month, I got an offer from ICAI to teach Law. It was great because ICAI Bhawan was next to my house but I had never thought of teaching grown-up students and that too without any experience. I accepted that challenge and within few months in the same year, I got more offers for teaching law in other Institutes for which my family allowed.

I was able to manage and continued my work. Later on, I took various assignments as ICAI-checker, became Orientation batch faculty plus MCS too. I then became so busy while settling in family, raising my son that there was a gap of 4-5 years and also because the time that could be spared was all gone in teaching. It was really difficult to restart things and I lost my interest in CA Practice but within 4 years our firm expanded and new partners were associated.

In the meanwhile, my husband asked me to join the Rotary club, though I was not an active member, I was nominated for upcoming president of the club for the year 2020-21. More challenges were yet to be faced.

In 2019 I was invited as a guest by a club at the felicitation ceremony of Mrs. International Global (the crown winner). There I met a person who asked me to participate in an upcoming fashion show for Mrs. India.

Though I always wished to go for a ramp walk since my childhood but was always afraid and hesitant. I was shy and reluctant and without any hope, for a positive response or any expectation I narrated the whole incidence to my husband and he too allowed it. It was again shocking!!

I gave online as well as offline auditions and cleared all the rounds, including singing and dancing. I got media coverage as I was AFT Mrs. India Finalist. It was a great moment indeed. The final round was due in the M/o September’19 in Kolkata which I did not attend as challenges continued to spring up & I got to know what I was expecting. Once again, I became a mother and was blessed with a baby girl.

I had a whole lot of new responsibilities. Now I had the responsibility of two children, my house, my in-laws, and my husband along with my ICAI classes and Partnership firm. I became President of the Rotary Club of Kanpur Elite in July’20 and I am thankful for the technology which has helped me in smoothly carrying out my work.

Online classes for kids, work from home, video conferencing, and webinars which was never thought of became the new normal and a boon for me. 2020-21 was a challenging period for everyone and don’t know how long will it last but for me Lockdown situation was a blessing in disguise.

Challenges often make or break people. Now the choice is ours, what we choose. We will emerge out of this situation. But this was the actual time when we got an opportunity to explore ourselves and to bring out the hidden talent. Learn new things and give a new and better version of ourselves. Not just to prove everyone out there but to improve ourselves and with this thought, I started my YouTube channel, Reflex Positively with Richa Agarwal, where I post positive thoughts with motivational stories every week. Being appreciated by students, friends, and relatives I have now become a role model as well as an inspiration for many. This keeps me motivated and encourages me to work even harder with more zeal and dedication and helps me keep going.

Life is not easy for anyone. Each one of us is having own difficulties and is facing them. Rather than taking difficulties as problems we can take them as challenges and try to out win them. Now we have to decide that we take them as a stepping stone or a milestone.

Many ladies go through such problems, but many of them give up thinking that it is God’s wish. But this is a mistake. God gives us problems so that we come out stronger. Have faith in God, continue to preserve, and he will surely show you the way. Solutions will come, provided we don’t give up. Don’t wait for the fruits of your action, have faith in God, and do what you have to do.

Lastly, I would like to quote a line from Gita:

“Do your duty and do not expect any fruit.” 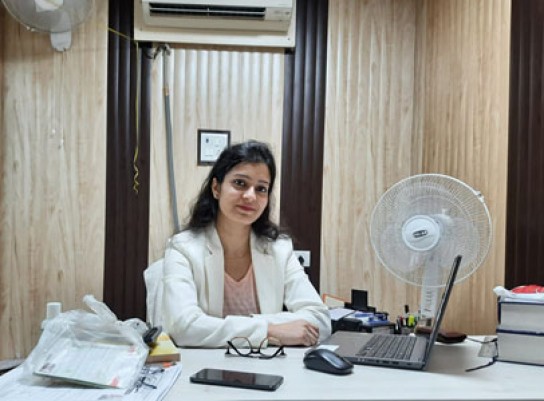