CA. Sangeeta Agarwal gives up a flourishing business to heed to her inner calling, and serve society

In 1989, 24 year old Sangeeta Agarwal, qualified as a Chartered Accountant. As there were several lucrative options before her, she needed to have clarity on her career path.
Her dilemma did not take root for long, as having just completed a one year long Industrial Training with ITC Ltd, at their head office in Kolkata, her seniors who were very impressed with her performance, felt that ITC Ltd was the right place for her to begin her career, and were encouraging her to do so.
What, however, continued to pleasantly haunt her, was the possibility of starting an independent practice, which could make her, in 1989, one of the very few women chartered accountants in the country to do so. There was a third alternative that engaged the precocious Sangeeta.
Her cousin, who is a leading stock broker in the city, was encouraging her to join him, and help him grow his stock broking business. As Sangeeta’s great grandfather was the first Indian president of the Calcutta Stock Exchange, she was aware and had some idea of, the stock broking business. However, in 1989, this kind of a career was almost taboo for women. Being an exclusive male preserve at that time, there were insurmountable odds to cross, just to enter, and then to survive, in this excruciatingly male-dominated field.
Within her inner sanctum, Sangeeta was a path breaker and trendsetter, since early childhood. She was obviously excited by the chance to traverse on this hitherto unchartered territory, fully aware of the downside, and the grave possibility of non-acceptance of a woman stock broker, by people in the trade; especially in a the field that was dominated by men, in the late 80’s- mid 90’s.
Impervious to the many challenges, CA. Sangeeta, chose not only to enter this hitherto “taboo” career for women, but went on to successfully dominate the field, and achieve outstanding success, glory and fame, all within a few years.
CA.Sangeeta, is, perhaps the first professional woman stock broker of India, who way back in 1989 -90, entered the uncommon business for a woman in those days, of stock broking. She soon established her own public limited stock broking company, took membership of the NSE, and made it go public, thus breaking seamlessly into this male bastion. In doing so, she became the country's first professional woman stock broker, heading, as Managing Director, a public listed stock broking company, whose shares were listed on three stock exchanges.
At a time when women were unheard of, and rather discouraged, to enter the stockbroking profession, which was till then an exclusive male preserve, CA. Sangeeta Agarwal not only showed tremendous grit and foresight to enter this male-dominated arena, but went even further, to survive and thrive in this exclusive “males only club”; all this within a couple of years, despite a huge personal tragedy that struck her during this time.
She tragically lost her first born, and at that time, only child. But her woes were not restricted to this excruciating loss. Barely had her tears dried, that another grave personal challenge arose. Her mother –in-law suffered a serious heart attack, and post survival, was diagnosed with cancer. She had to relentlessly cope with her severely ailing mother-in-law’s treatment and care. The care required was humongous, and the demands of the situation on Sangeeta were of unimaginable proportions. To make matters worse, her father in law, during those trying times, was run over by a bus, his right leg crushed, and he was hospitalized for several months, with the doctors giving little hope of saving his leg.
To overcome such frightening and seemingly insurmountable odds, which would have shattered, many brave hearts, she displayed tremendous, strength of character will power, resilience and determination, to tide over her fate. In fact when she was expecting her second child, after having lost her first one, and despite family members and friends suggesting otherwise, she flew to Mumbai, to take the interview with the NSE, of which she became a member.

She guided her company astutely to achieve high revenues and margins. Within a year she had established herself as a successful woman stock broker of the country. Within a few years, her company’s turnover and clients grew manifold, showing nearly a 100 % growth, year on year, and her client list comprised industrialists and top corporate houses of the city.
For this stupendous success, despite repeated personal tragedies, Sangeeta has been recognized and awarded with over 25 coveted national and international awards, including, and being the only awardee in 1996-97, of the FICCI Outstanding Woman Professional of India Award (Received from Shri P. Chidambaram, the then Finance Minister of India, and beating the likes of Naina Lal Kidwai ex- chairman HSBC, and Industrialist Sangeeta Jindal etc., to be the only woman awardee that year)

And Bharat Nirman Award for the year 1998, in the link:

She is also the recipient of The Indira Gandhi Priyadarshni Award (received from KC Pant , the Ex Defence Minister of India) , The Indian Express Award, Rotary Club of Calcutta Award, The Outstanding Young Person of West Bengal Award- 96-97, given by Shri Subhash Chakraborty, the then sports and transport minister of West Bengal, and the Bharat Nirman Award, which is given yearly, to women for their outstanding achievements, by Shri MC. Bhandari, ex-president of ICAI, and several other reputed awards, from prestigious organizations.

Her Bio Data has been published by the American Biographical Institute (ABI) to be among the 1000 coveted women of the world, whose CV, was published for their achievement. She was nominated for the prestigious WOMAN OF THE YEAR AWRD by ABI, and her profile also features in the Asia Pacific who's who 1999-2001.
She has featured in many articles, published about her achievements, which she achieved, despite tremendous personal tragedies and professional challenges, in leading magazines, newspapers, and on TV, including national news.
Subsequently, she went on to establish her own commodity trading company by taking membership of the NCDEX, and became, perhaps the country’s first professional woman commodity broker.
After being in the stock broking and commodity broking business for over 22 years, in 2011, when she was at the zenith of her achievements and glory, she decided to close shop, and move on further in life, as she, no longer was interested in material pursuits like fame, glory or money, and wanted to listen to, and fulfill her inner calling, and give back to society whatever she could, with her expertise and knowledge.
Sangeeta has always been extremely spiritually inclined from her childhood, meditating from a very young age. She has always wanted to be associated with a leading NGO of the country, at some point of her life, to serve society. She was fortunate to be offered the platform of one of India's, and the world's, most respected spiritual masters, Gurudev Shri Shri Ravi Shankar, and joined one of his organization’s; Shri Shri Ravi Shankar Vidya Mandir Trust- (SSRVM) unit in Kolkata (Sri Sri Academy), as its CFO, where she has been serving for over 10 years now.
Sangeeta, still has 5 years to retire, and post retirement, she intends continuing working as a consultant, and also wants to devote time to help her husband, Sanjay Agarwal, also a CA, who has retired from one of India's leading MNC, and is mentoring children for free, from the less fortunate sections of our society, in which he has received tremendous success and satisfaction.
Both Sangeeta and her husband, CA.Sanjay Agarwal are extremely content with their lives at present, and have no desire, whatsoever, for any further fame or glory. They want to focus the rest of their lives on social service, and work for the benefit of society, help the downtrodden, and fight against injustice, inequality, discrimination and degradation, especially for the less fortunate in our society.
Sangeeta, so to say, has 'been there and seen it all', and would prefer to remain an 'unsung hero'.

After traumatically losing her first son, Sangeeta and her husband, by the grace of God, have been blessed with an extremely adorable son, who recently graduated from India’s top most university, IISc, and is presently pursuing a PhD in Computer Science, at the world famous Courant Institute of Mathematical Sciences, New York.  Like his mother, he is also an award winning super achiever too. (Click this link, to know about this academic genius)

While we often read about many women who have left service and set up a successful business, it is rare to see a business woman, who overcame repeated personal tragedies and several professional challenges, to close shop, at the peak of success, to hear her heart’s calling, and leave a flourishing business, to serve society. Sangeeta’s, unique story, should inspire a lot of young women, and may motivate the younger generation of woman entrepreneurs. 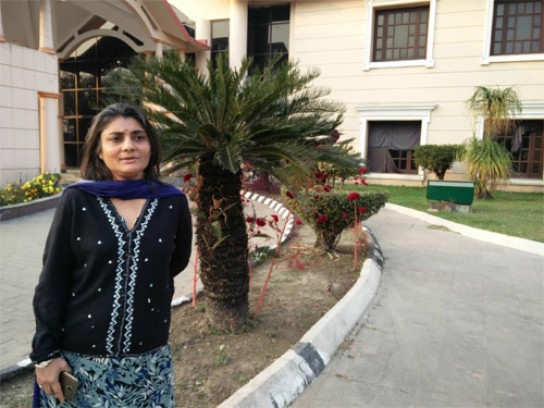